This post is about more than pie. It is about a man named George, who really really loved pie.

Last week, our family lost one of our rocks, my Grandpa George. Today would have marked his 89th birthday. We miss him so very much – but we also treasure all of the time we had with him. Eating Angel Food Cake, days at the beach, strawberry shortcake, his presence at (almost) all of my performances, Siesta Key, milkshakes, Frankfort… PIE. I realize a lot of my memories of Grandpa have to do with food – this is not surprising – the man loved to eat.

He and my Grandma met at the University of Michigan, in the registration line. He was in his Navy uniform, and she was looking like the fancy Nancy she is. They began dating soon after, and quickly fell in love. While at U of M George played for the football team and as a Wolverine conquered USC in the 1948 Rose Bowl National Championship Game.

When George asked Nancy’s father for permission to marry her, he said “Get your degree, and get a job.” So he did both. So began a storied career with General Motors, where he started on the night shift and worked his way up to the executive level. They had four wonderful children, three sons and a daughter – my mother.

Over the past 27ish years I have gotten to spend a lot of time with George and Nancy, we always headed down to Florida to be with them on Spring Breaks – and that didn’t end in college. While my friends headed to Cancun, I went to my Grandparents. And I don’t regret a single missed margarita. With George, Nancy, and my family was exactly where I wanted to be. 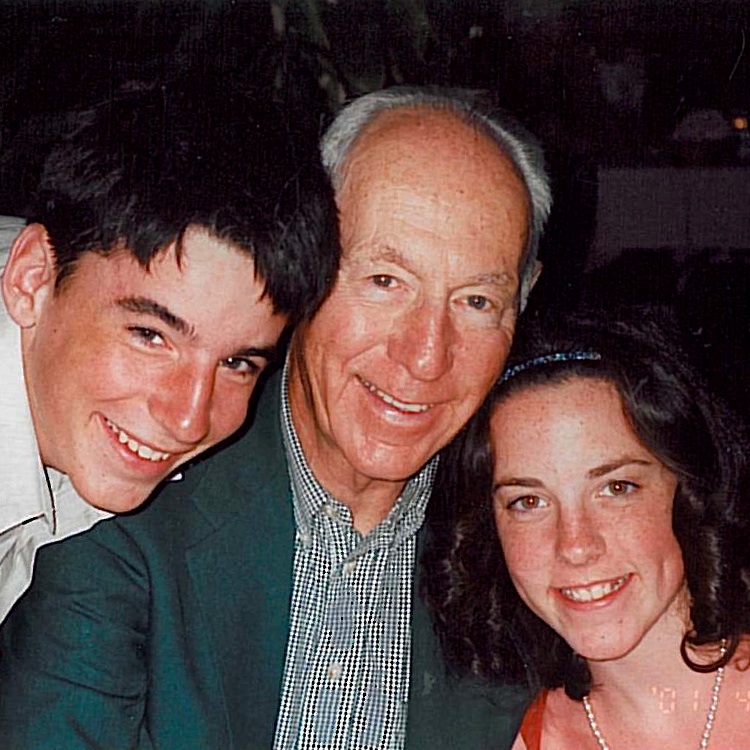 During the summers George and Nancy would head up to northern Michigan, conveniently about an hour away from my hometown. We would head over for ice cream, milkshakes, and unbelievable Lake Michigan views. We would conduct back-to-school shopping, and my favorite – book shopping! We would help sell odd George Washington rockers to passer-by at the local sidewalk sales, and would enjoy whitefish and Shirley Temples at The Manitou. (Well Grandpa would have his Crown Royal and Nancy her “White Zin.” )

What strikes me most about my “childhood” memories, is that time just seemed simpler. There weren’t cell phones buzzing constantly, or the internet to distract you from company. (Though they did have WebTV – remember that?) Instead when family was together, we enjoyed each other’s company – even if it was in silence, while reading a book or watching a movie. As much as the convenience of cell phones and being able to look up anything in seconds is fun, I am nervous that my children won’t have the ability to look back at their childhoods the same way I do. It does seem as if our generation is a transitional-generation of sorts, we’ve been exposed so much to ever changing technology. And I just wonder whether it is to our benefit. 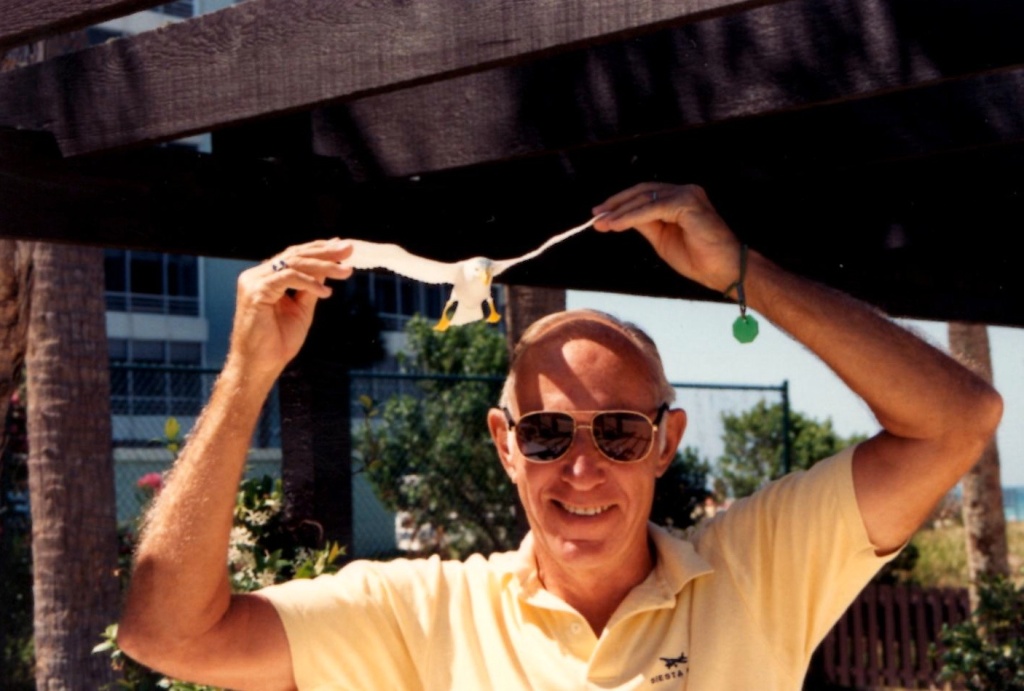 George had an unbelievably dry sense of humor, one I learned to love and appreciate as I grew older. He adored his children, and his six grandchildren – constantly marveling at our accomplishments and supporting us in our failures. Regardless of where he was – he always exercised. A lifelong athlete, with the mentality of a strong Wolverine, he exercised tirelessly. I have memories of seeing him shirtless working hard on the Nordic Trac. He suffered a heart attack prior to me being born, during a jump rope session and described the sensation as “feeling like he wasn’t trying enough.” Seriously. 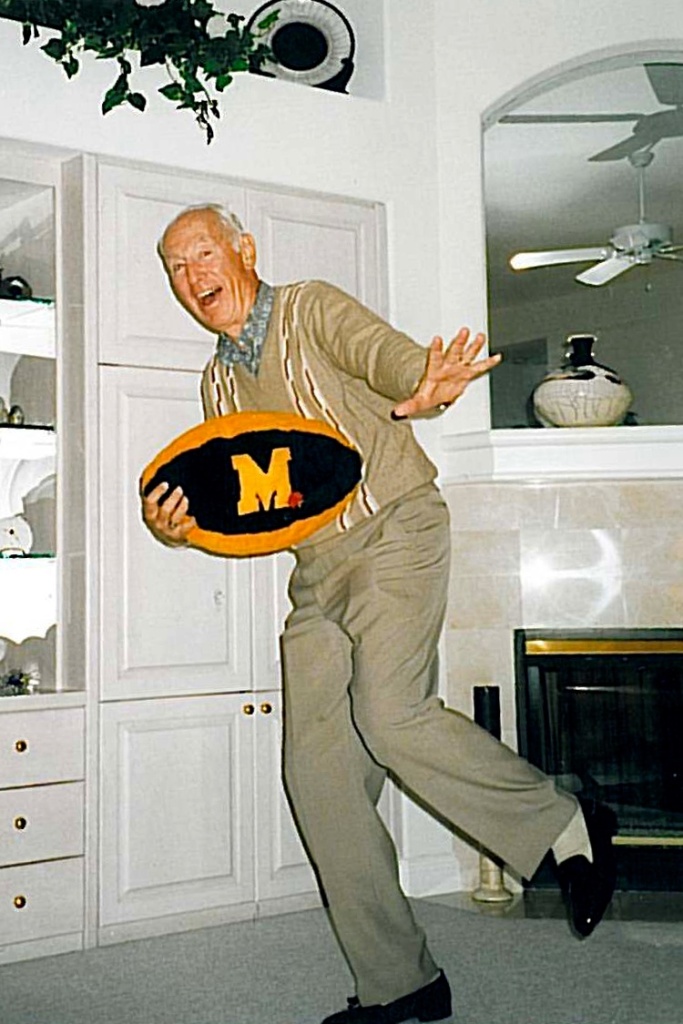 His exercise regime could only be rivaled by his dedication to golf. Day-in and day-out, he golfed. He belonged to some of the most epic golf courses, always including my brother even from a young golfing age. He included Charlie once, but as he said “He has a lot of power – we need to work on direction.” When his balance began to deteriorate and he couldn’t golf as much, people asked my Grandma if she was happy to have her husband back. Nancy responded that she couldn’t get as much shopping done.

To counter-act his failing balance, he began to use the Wii. In the mornings you could find him on his Wii Fit, working hard at balance games, for hours at a time. He often beat me, I didn’t handle it well. In 2012 he was diagnosed with Non-Hodgkins Lymphoma. It hit all of us really hard. This man who had always been invincible had a battle none of us had anticipated. Soon after his diagnosis, Charlie and I got engaged. I made him promise he would be at the wedding, he made me promise there would be Crown Royal. George fought valiantly, and beat the Lymphoma. He was cancer free at our wedding, and we danced. It was one of the highlights of the night, at least to me.

A few months later, in January, my parents and I were down in Florida for a visit. It was then George and Nancy told us that he had been diagnosed with cancer, again. To be honest – I think we all kind of thought “Okay! No biggie – you’ll beat it again.” To us, George was almost immortal. He began treatments immediately, but instead of helping – they hurt. In early February he found himself in the hospital, with low blood counts and pneumonia. The entire family (located in the continental US) flew in to be with him, and say anything we felt needed to be said. I was able to stay for five days, and make him mashed potatoes – and pie, of course. I could see he was getting weaker, and most likely he would not recover. It was a lot to handle, but I also saw how unhappy he was in his state. His athletic drive couldn’t sit and lounge all day, he wanted to be moving, but he just physically could not.

At the end of March my mom called and told me the end was nearing, Grandpa may pass soon. I made a ticket to come down Easter weekend, knowing that I may miss him but wanting to be with my Grandma and my mom, regardless. At that point, I honestly couldn’t quite imagine the repercussions of his absence from our lives. In the early morning of Thursday, April 2nd – George peacefully passed in his sleep.

Over Easter weekend, my mom, Grandma, and I cried and laughed at all of the memories we have of Grandpa. Of all of the times he brought joy to our lives. 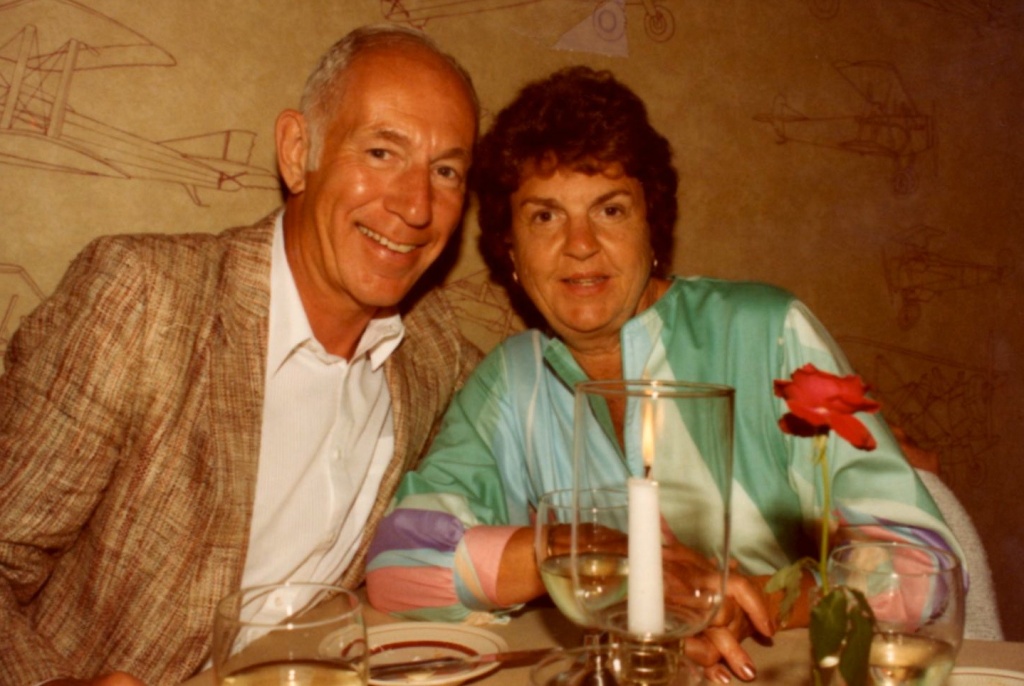 George and Nancy would have been married for 69 years in September. A feat rarely accomplished these days, their marriage was one of complete selflessness. Their goal was always to make the other happy. They would pinch each other’s tush, and kiss each other throughout the day. As Grandma said, “He did everything for me. And I did everything for him.” In a time when relationships can often be focused on “What can you do for me?” I think their relationship ideology is one we should all strive for; to be selfless, and focus not on each other’s deficiencies, but instead on their wealth. Other than the example they set, one of the greatest gifts they gave me was my Grandma’s wedding ring that I now use as my own. A lovely gold band with their initials and wedding date engraved. It is a constant reminder of their selfless relationship, and inspires me to be a better person and wife.

I feel so honored to have had a Grandpa in George. One of my favorite things was to make him pie. He often tried to pit my mom and me against each other in pie contests. “Oh this is good, but your mother made a pie last time – it was may have been a little better.” We would humor him, feigning competition. The first time George and Nancy met Charlie we arrived late in Orlando, George drove home from the airport while Nancy and I chatted away. I don’t think George had spoken a word all evening until we arrived home and he took advantage of a brief silence between Johnson women “It has been a while since I had any pie.” He said directly looking at me. “Oh! Grandpa, you want me to make you some pie?” “That’d be very nice.” Charlie watched this interaction with wide-eyes, and that weekend I made Grandpa three large pies. Charlie then set his life relationship goal, to be able to request pie, without actually asking for it. I told him fat chance – it was a George thing.

In honor of Grandpa, I want to share our Peach Pie recipe, which for the record – isn’t anything special. It is only slightly adapted from everyone’s Betty Crocker fruit pie recipe, but for some reason it always felt a little magical making it for him and my Grandma.